27-Year-Old Man Kills His 38-Year-Old Girlfriend For Allegedly Refusing To Quit Prostitution
David on 16 Apr, 2021 with 110

The woman's live-in lover, Michael Ikechukwu, was alleged to have stabbed her during a quarrel, last Monday. 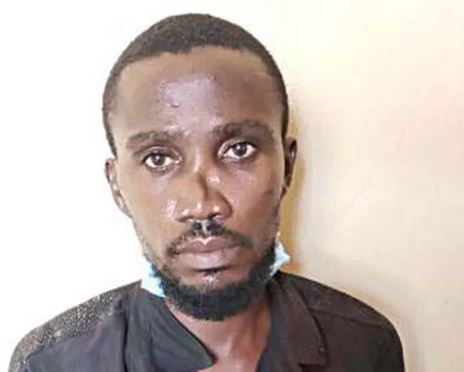 Michael Ikechukwu, a 27-year-old man has been arrested by the police over the death of his girlfriend who died from a stab wound.

According to Vanguard, he shout for help from an apartment at 11, Abuja street, Alaba Rago, off Mile 2 Badagry expressway, Lagos jostled residents who rushed to know what was happening.

Writhing in pain was 38-year-old Chinyere Orji, with a sharp object later discovered to be a broken piece of mirror which pierced into the right side of her ribs.

Her 27-year-old live-in lover, Michael Ikechukwu, was alleged to have stabbed her during a quarrel, last Monday.

Unfortunately, she died before being rushed to the hospital.

As you read this piece, Michael is cooling his heels at the State Criminal Investigation and Intelligence Department , SCIID, Yaba, from where he would be charged to court to answer questions bothering on the murder charges.

In this interview  with him,  he claimed to have  known  late Chinyere as   a commercial sex worker at Apapa, for three years and four months , adding that the incident that led to her death occurred during an argument on his insistence for her to quit prostitution.

According to the Eboyin state born; “She told me she wanted to go out that day.  We went to TV line, stayed for about 10 minutes before she said she was going back home.

“By the time I went to meet her at home, I knocked but it took a long time for her to open the door.

“When she did, I asked if she was okay, she kept quiet. When I asked what the problem was,  she got angry and started packing her things, saying she was leaving the house.

“When I asked where she was going, she said I shouldn’t ask her. I locked the door, preventing her from leaving.

“She started shouting at the top of her voice that I should open the door and that I should not ask her where she was going, since  I knew she was a hustler.”

”At that point, I started calming her down but she insisted on leaving. She said she was going to look for money.  She started scattering everywhere, insisting she must leave. Out of provocation  I slapped her and told her to re-arrange the room.

“In an attempt to scare her, I slammed the standing mirror on the ground and it shattered. Unfortunately, a piece pierced into her right rib and she started shouting that I had stabbed her .

“I rushed outside to get a tricycle to take  her to the hospital. By the time I came back, I met policemen attached to TaskForce, in the apartment.

“They held me and informed that she was dead. They took me to their office, where I spent the night.

“The next day I was taken to Ojo Police division from where I was brought to the   SCIID. If I had known, I would have allowed her to go and hustle”.
Marriage

Asked what he meant by hustle, he disclosed that late Chineye was a commercial sex worker. He recalled how they met at Apapa, where he hawks electronics accessories.

He debunked earlier report that he stabbed her during argument over the amount he was supposed to pay her after having sex with her.

Describing the report as false, Ikechukwu said: “I met her at a drinking joint in Apapa, after hawking. We got talking and I invited her to my house at Alaba Rago.

“She had been living with me for three years.  I knew she was a commercial sex worker but I accommodated her because I loved her.

“I never treated her like a prostitute by paying her anytime I had sex with her. But I gave her money for housekeep.

“I bought her cloths, gave her money   to make her hair and also gave her pocket money. But she always complained it was not enough.

“I swear, I loved Chinyere.   We had some things in common. For instance, she smoked like I do and she was into alcoholic drinks like me. Besides, she also satisfied me sexually, which is the main reason I loved her.

“While living with me, she usually went out at night to prostitute. I never met her at home when I came back from work. People taunted me about  it but   I still tolerated her because of the love I had for her.

“Last year, I told her to stop prostituting because I intended to marry her.  She had two children of ages 21 and 9.

“Her first child is married with a baby, while the younger one lives with her aunt. Yet I didn’t mind spending the rest of my life with her .

“I never meant to kill her, I only wanted to prevent her from going out that night “, he said.

Expressing regrets over his action, he disclosed that none of his relatives was aware he had been arrested.

Spokesman for the Lagos State Police Command, CSP Olumuyiwa Adejobi, said the suspect would be charged to court .

an hour and 28 minutes ago